Attractions offer something for everyone. Things to do include attractions for kids, free attractions, theme parks, thrill rides, museums, gallerie, collections and more

America's family fun capital, Disney World is the largest and most popular theme park in the World and covering 47 sq miles. It consists of four major theme parks, two water parks, a couple of golf courses, an indoor theme park and much more. Plan your family vacation and create memories for a lifetime.

Timeless tales of fantasy, and seven lands of make believe are all brought to life in the Disney Magic Kingdom Park 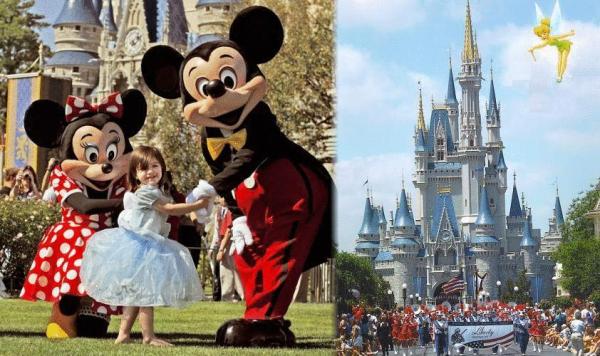 Disney's Blizzard Beach
Disney's Blizzard Beach Water Park, one of 2 Water Parks in Walt Disney World Resort, features one of the world's tallest and fastest free-falling waterslides, as well as slides and rides for the whole familyâlike a kid-sized, snow-castle fountain play area with scaled-down versions of the more thrilling attractions.

Operating Hours / Park Hours
Hours of operation vary throughout the year and are often influenced by special events, so it's a good idea to call to check opening/closing times.

Which attractions are open during Extra Magic Hours?

Disney World FastPass
It's free, it's simple, and it saves you from standing in line for the most popular rides.

How does Fast Pass Work
FASTPASS is essentially a "virtual" queuing system - guests who obtain a FASTPASS are entered into a virtual queue in the computer which saves their space in line and then (based upon how many guests are in front of them in the virtual queue) calculates the time it would take to come to the front of the line -- this becomes their return time.

With four major theme parks Magic Kingdom, Epcot, Disney's Hollywood Studios, and Animal Kingdom....a Walt Disney World vacation can be complex and costly: all the more reason to plan carefully to make sure you have the best possible time.

Check out age and height requirements for attractions: you don't want your child to look forward to a ride he/she can't go on!

Study the park calendars for parades, live entertainment, and fireworks, so that you get the most from each day. Remember, distances between the parks are considerable, so if you want to end up in a particular park for fireworks, plan accordingly!

During busy times, parks stay open late and you may find extra parades and fireworks.

Unlike other counter service locations, drink refills are free at the Backlot Express Restaurant at Disney's Hollywood Studios.

Use the single rider line on some of the most popular attractions to dramatically decrease wait time. It is available at Rock N Roller Coaster, Expedition Everest, Test Track, and Mission: Space.

Get to the theme parks early. This advice is especially important for Disney's water parks (which are packed by noon) and Animal Kingdom (which closes early.)

To avoid paying for parking at Disney, try taking the Disney resort buses. Park at Downtown Disney (in the lot in front of Planet Hollywood) and just hop a Disney bus to any resort then get a connecting bus/monorail into the park of our choice. We didnât pay a penny for parking and got from Planet Hollywood to the park in under 20 minutes

Use the Disney Transportation System
Every hour of the day, and well into the night, blessedly cool Disney buses ferry people free from one park to another and to and from the Disney resorts. Monorail and boats are other cool ways to get around.

Be sure to understand ticket purchase. Magic Your Way: park admissions are sold as a base ticket plus options.

When going to Animal Kingdom, make sure you make reservations for breakfast that are before the park opens. That way you get into the park way early and get first in line onto awesome rides

Save money at counter service restaurants throughout the parks by requesting the entree without the sides. By ordering a sandwich without the fries, you can often save over $2!

Pick your park according to "Extra Magic Hour".
Which park will you go to today? Keep in mind that, every day, one of the four theme parks opens early for Disney World resort guests only. Either rush to the early opening yourself, (if you're staying "in the World"), or avoid that park for most of the day.

Food at Theme Park
Food is expensive in the theme parks, no question. You can scout some bargains, but sometimes spending more on a full buffet is a better option

Use Advanced Reservations for restaurant meals
It's easy, it's free, and usually entails no commitment -- yet you get seated quickly instead of waiting in line.

Each edition is updated with the newest information, and has so many tips for saving time and money that it is well worth reading more than once.

Unofficial Ways to Prepare for Your Trip to Walt Disney World

Unofficial Guides field tested touring plans can save as much as four hours of standing in line in a single day.

Disney Tickets
Disney's ticketing structure (called Magic Your Way), gives visitors who stay here for a few days far better deals than those who come for just a day. The system allows guests to customize their tickets by first purchasing a Base Ticket for a set fee, and then allowing them to purchase add-ons, including a Park Hopper option, a no-expiration option, and the option to include admission to some of Disney's smaller venues, such as Pleasure Island, the water parks, and DisneyQuest

You can purchase your Base Tickets for durations running from a single day to several days, with the latter being the most cost effective; the longer you stay, the less you'll pay per day.

Where NOT to Buy Disney World Passes

There are lots of legitimate ways to get discounted Walt Disney World passes. Unfortunately, there are also many ways to get ripped off.

There are now many web sites out there that seem to be offering super low prices on Disney tickets. Many are total scams.
(Disney does not allow its authorized ticket dealers to use the word Disney in their URLs)

It is a very bad idea to buy Disney passes on eBay or Craigslist
Unfortunately both of these online resources are extremely popular with con artists. The passes being sold are often partially or completely used up (if they even bother to send you anything at all). There is no way to find out if the tickets are any good in advance of your trip. You are very likely to arrive at the gate and find out you have invalid passes.

A neat thing about leftover days on a child's "no expiration" ticket: if the child turned 10 since you bought the ticket, he or she will need an "adult" ticket to enter the theme parks. In these circumstances, the child's ticket may be presented at any Guest Services location, in person only, to have it exchanged for the required "adult" ticket -- at no additional charge! This only applies to partially used tickets that have not expired.

Upgrading Tickets
You can apply the value of an unused ticket, or even a partially-used one with days left on it, toward the purchase of a higher-priced ticket.

The first thing you should do when you buy Walt Disney World tickets is make a photocopy of the reverse side (the side with the magnetic stripe). If you lose your ticket, your only hope of getting it replaced is to have the coded information on the back. The seemingly random numbers, letters and dates you'll see in a couple of locations on the backs of your tickets will help Disney replace the tickets if you lose them. Disney will usually reissue a pass if you can provide that information, though it is not obligated to do so: the tickets state that "Disney is not responsible for misplaced, lost or stolen tickets."

Buy Ahead of Time
Purchasing multiday tickets (from 4 days and up) ahead of time (through AAA or the Orlando Convention & Visitors Bureau) can result in substantial savings (up to $12 per adult and $8 per child ages 3-9 depending on the type of ticket). The savings for a family of four easily can add up to $40 -- that's worth a lunch (well, at least a snack in Mickeyville).

Before leaving home, call or write to the

for a vacation CD and the Walt Disney World Vacations brochure; both are valuable planning aids. Both can also be ordered (and even viewed) online at www.disneyworld.com. When you call, also ask about special events that will be going on during your visit.

Quietest times to visit
January after New Year; First half of February; September after Labor Day; October; November up until Thanksgiving week.